I hope you all had a great Independence Day weekend! Our month-in-review is a little late, but I hope you enjoy the update all the same.

I spent the second week of June in Carmel, Indiana for the 2021 IMCL conference. The conference was incredibly content-rich and provided a lot of lessons to learn from and successes to emulate for Aurora. A conference recap will be the main topic of our July 14th Ward IV meeting, so if you are interested in hearing more about some of the transformative ideas we can apply for Aurora be sure to join us! In the meantime, here’s a photo of part of the Palladium, Carmel’s performing arts center that serves as the anchor to their city center. This kind of venue is something that we definitely need in Aurora, and I’d love to get your thoughts on this (and more) next week! 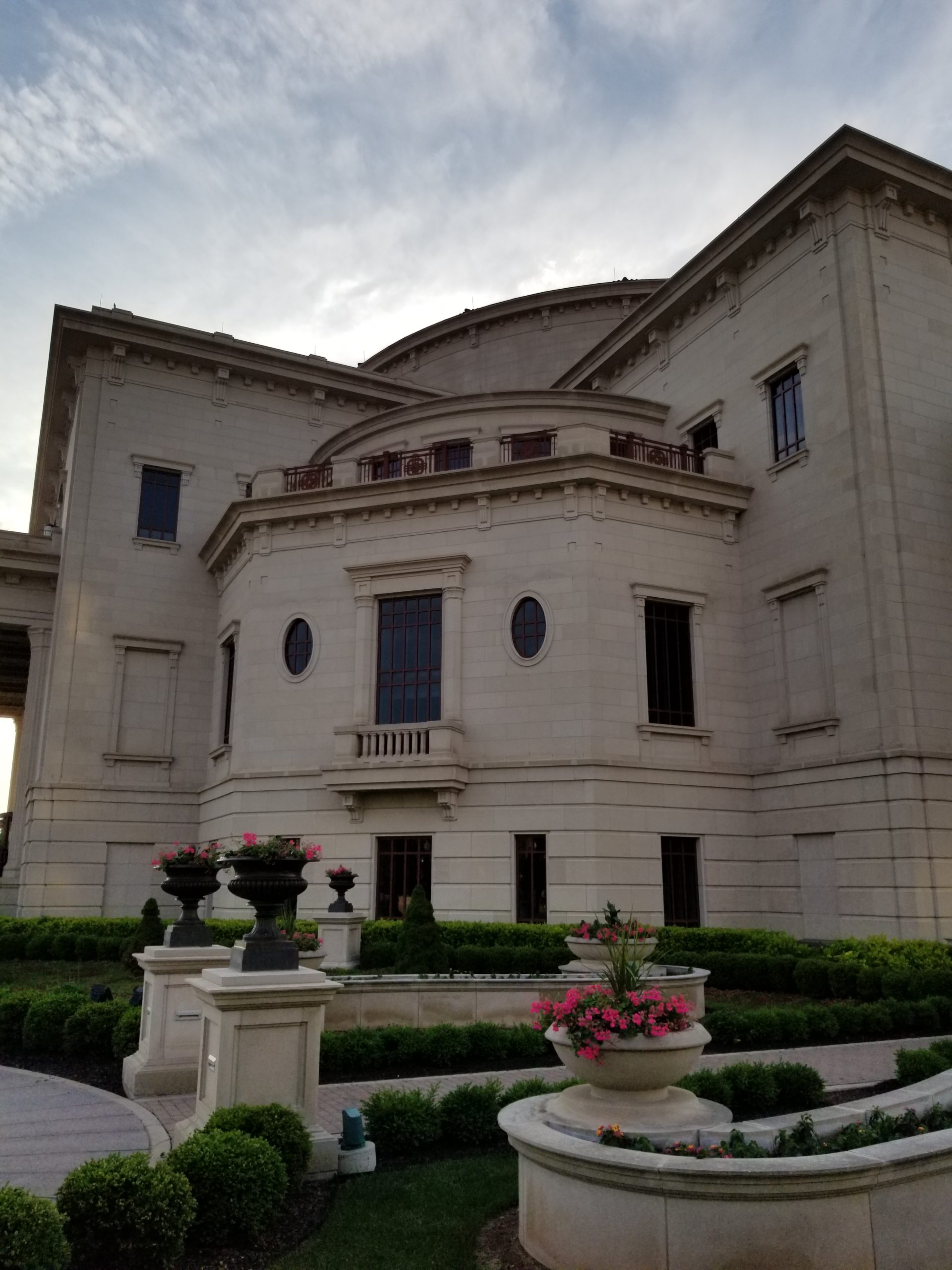 Our neighbors around Utah Park have been asking for enhanced security at the north lot as it is used as a gathering spot for folks after dark that sometimes results in disruptive behavior, including reports of fireworks and firearms being discharged. One of the asks that came from our community meeting last summer was for more lighting. I am happy to report that the last hurdle to getting the lights installed was cleared! See the letter below for more information. 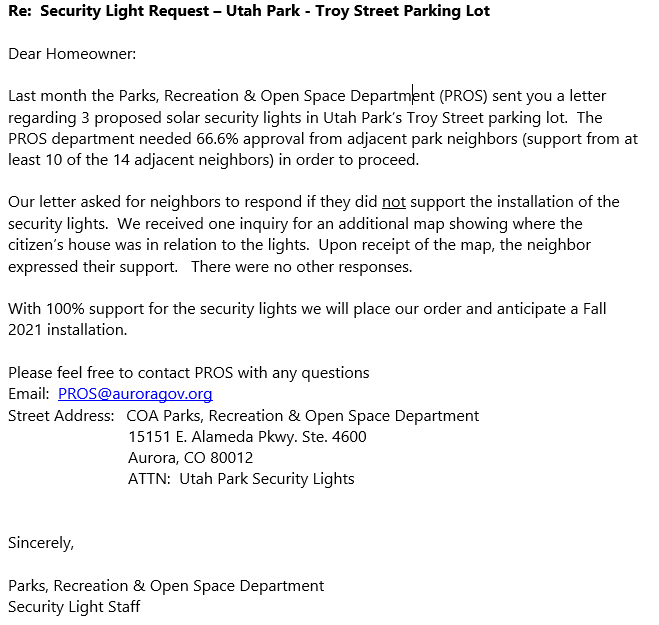 We should have the new lights installed this fall! Thank you all for meeting with me, sharing your asks, and for your continued advocacy and partnership in making this happen.

I’ve had the change to meet in person with several of our neighbors over the past few weeks to discuss infrastructure issues in their neighborhoods. I want to give a shout out to City Manager Jim Twombly, Street Operations Manager Tom McMinimee, Deputy Director of Public Works Lynne Center, Streets and Traffic Manager Carlie Campuzano, and Streets Project Manager Raul Griego for meeting out on site with Ward IV residents to discuss their concerns.

We discussed potholes, sidewalk repairs, Americans with Disabilities Act upgrades for our older neighborhoods, new crosswalks, and more. During these conversations we discovered a common thread — many of our neighbors aren’t aware that city staff and council depend heavily upon resident input to address problems in our city. For example, from an infrastructure maintenance standpoint, the city has over 4,000 lane miles of paved roads and only eighty staff members to keep up with maintenance. We realistically won’t be able to see every issue on our roads, but with your help we can ensure that problems are addressed quickly.

The tool to make that happen is Access Aurora, which you can use on a web browser here. You can also snag a phone app version of Access Aurora on the Google Play or Apple Store

This is a snapshot of what it looks like on Android devices. You are able to report all manner of issues through Access Aurora, from animal services to water issues. I highly recommend you bookmark the desktop link and/or download the app onto your smartphones. It is quick, easy, and can be used anonymously if you are concerned about privacy.

My proposed resolution to hire a consultant to craft a business plan for a public bank in Aurora was postponed after we received some critical information from a public finance expert working in the arena of public banking about an hour before study session. The bad news is that there are two statutory hurdles that need to be addressed before the creation of a business plan is warranted. The good news is that we learned this information without having to spend a penny on a consultant. I am currently working with partners at the legislature to help clear these hurdles for Aurora and other municipalities in the state who may be interested in pursuing a public bank. The silver lining on this delay is that we’ll be able to study San Francisco‘s efforts to set up their own public bank and learn from their experience.

The energy and momentum around public banking in Colorado and the rest of the country is growing, and I am hopeful that before long we’ll be able to say we played a part in blazing the trail for equitable economic development and more responsible use of taxpayer dollars in our state.

Governor Jared Polis signed legislation last week to enable municipalities to use ranked choice voting (RCV) in nonpartisan elections. I am extremely excited by the legislature and the Governor’s support for RCV, and by provisions in this bill that allow cities that span multiple counties (like Aurora!) an easier path towards using RCV in their races.

I believe nobody should win elected office without a majority of the vote, and I strongly support adopting RCV in Aurora. As rulemaking gets underway with the Secretary of State’s office, I’ll be working to put together community events to discuss RCV and go through simulated elections to demonstrate how intuitive this system of voting is and how it is far better suited to deliver results that better represent the values and priorities of Aurorans. Until then, you can check out this quick primer on how RCV works with single-winner (Ward and Mayor) races and this one for multi-winner (At-Large) races put together by Minnesota Public Radio.

Our next Ward IV meeting will be on Wednesday, July 14th at 6:30 PM. You will be able to join here via WebEx (password is Ward4) and here via Facebook Live. Our topic will be a recap of the International Making Cities Livable 2021 conference, and I hope to get your thoughts on how we can apply some of the concepts and ideas shared at the conference to Aurora.

I am also excited to announce that our August Ward IV meeting will be in-person on Wednesday, August 11th at 6:30 PM at the Five Star Residences of Dayton Place, located at 1950 S Dayton St, Aurora, CO 80247. We will be experimenting with a virtual option through WebEx and Facebook Live in order to keep our meetings as accessible as possible.