March was an eventful month with some good news on infrastructure improvements, successful COVID vaccination clinics in the books, a massive snowstorm, and tragedy striking our nation and region once again.

The Arapahoe County Transportation Subcommittee met earlier this month to discuss how to allocate a portion of COVID-19 relief money from the Denver Regional Council of Governments (DRCOG) to projects within Arapahoe County. The pot started at $8.1M and gave priority to jurisdictions that already had projects in the pipeline before moving on to reduce the public match for projects that were already underway. Only one of the pipeline projects was ready to move forward, so the remaining $7.3M was distributed throughout the existing projects to bring their public match components down as close to 20% as possible. The end result was savings for Aurora in the ballpark of $3M by shaving our overmatch down to 22% on the Nine Mile Pedestrian and Bike Bridge, the 13th Avenue Corridor study, the city-wide Missing Gap Sidewalk program, and improvements to the the Parker-Quincy-Smoky Hill intersection.

It is my hope that these funds will be put towards expanding the number of missing sidewalks that we can complete in the city. I’ve heard from many of our neighbors who live along Peoria and Yale about the need for accessible sidewalks as the community ages in place and to better connect them to The Point at Nine Mile and have conveyed those requests to staff.

The snowfall we had earlier this month was the 4th largest snowstorm in Aurora’s history. Thankfully this late-season storm melted off fairly quickly, but the impacts on our side streets were felt for days after the snow stopped. Several of our neighbors brought Denver’s residential snow plowing program to my attention in the days after the event. Rather than send large plows through residential roads which can block driveways and bury vehicles, Denver uses 4×4 pick-ups with smaller blades to flatten (not clear) a path in the center of each residential street in order to create a packed area that is navigable.

I forwarded on this information to our Streets department with the ask to determine whether a similar program would be feasible for Aurora after major snow events. Staff is currently preparing a post-mortem on their response to the storm and will be including a response to this ask in that presentation.

We have two completed clinics in the books and one more coming up in our efforts to get our community vaccinated. Our first clinic was set up in partnership with Representative Iman Jodeh and the Colorado Primary Care Clinic and served over 200 people at Masjid Abu Bakr. Our second clinic grew our partnership to include the Colorado Primary Care Clinic, the Colorado Alliance for Health Equity Practice, and the Havana Business Improvement District and served over 400 people at the Stampede. Our third clinic is coming up on Saturday, April 3rd adds Representative Naquetta Ricks to the growing list of partners for these events and aims to serve 750 people at the Stampede! 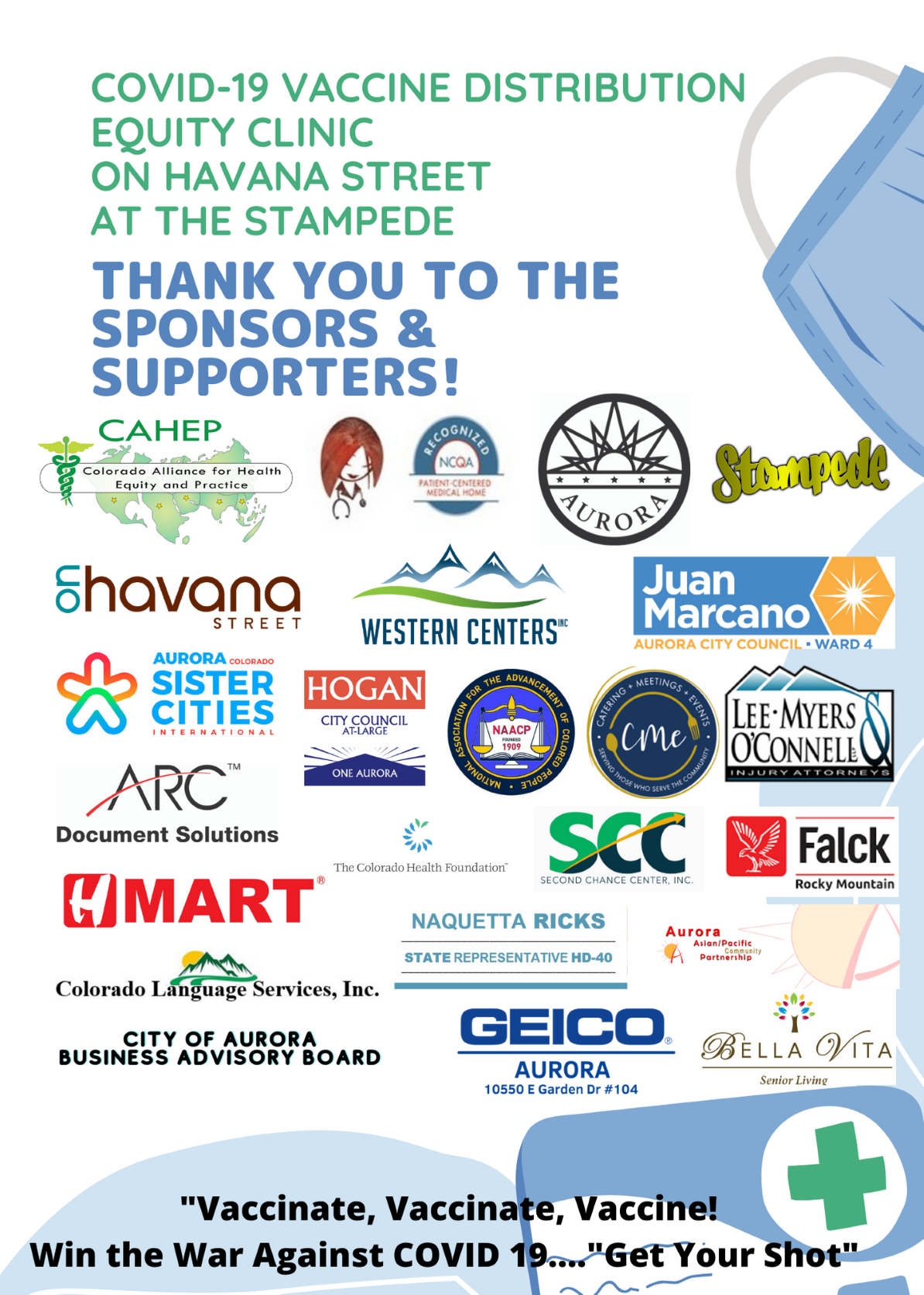 This does not constitute an endorsement of any other candidates for political office.

Sign-ups for this event are closed, but there will be more coming up in the near future. Future clinics will be open to everyone for registration with Governor Polis opening up vaccine eligibility to the general public on April 2nd, though people in previous phases will continue to be prioritized until vaccine supply increases to match demand per a quick conversation with one of the providers. I will continue to share registration links for events as I learn of them on Nextdoor, Twitter, Facebook, Reddit, and Instagram, so stay tuned!

I was invited to meet with leaders in our Korean community along with Congressman Jason Crow, Aurora Immigrant and Refugee Commission Chair Kevin Vargas, APD Chief Vanessa Wilson, and Mayor Mike Coffman to speak about the rise in anti-Asian hate crimes in the nation and to hear from community what they’d like to see the city do to combat bigotry.

I want to commend Chief Wilson for her commitment to ensuring a strong response for anyone who engages in a hate crimes and for conducting outreach to the AAPI community to overcome language and knowledge barriers in the reporting of racially-motivated crimes. A strong response must also be accompanied by proactive movement to deprogram hatred at the source.

At the local level I believe that must include educational partnerships with our school districts, increased cultural exposure through programs like Aurora Sister Cities International, and creating shared experiences that build understanding and appreciation for the diversity of our community. This issue becomes much pricklier at the federal level due to how the courts have hamstrung past efforts to rein in the ability of merchants of hate on the radio and on the Internet to propagate their message. I am grateful that Congressman Crow was there to hear our community’s concerns directly and believe he understands the need to attack this at the source.

Our next Ward IV meeting will be on Wednesday, April 14th at 6:30 PM on Webex and simulcast on Facebook Live. We’ll be joined by Sergeant Matthew Novak to discuss motor vehicle thefts and break-ins in our city and throughout the region, then joined by Drake Brownfield and Gordon Tucker to talk about historic preservation in Ward IV and Aurora overall, and wrap up with open Q/A. You can join the meeting on Webex by clicking here or participate via Facebook Live’s chat feature at www.facebook.com/marcanoforaurora. I hope to see you there!