Hello community! It’s time again for an update on what we’ve been up to at city hall.

We had about 45 folks turn out for our monthly town hall meeting! Thank you to those of you who made it out, and here’s a quick run-down on what was discussed for those of you who couldn’t make it.

Aurora’s Next Chief of Police

City Manager Jim Twombly joined us for the first third of our meeting to hear from our neighbors about what they want to see in their next chief of police. Along with the open Q/A, the city passed out a survey to get written feedback from Ward IV residents to compile with surveys from the rest of the city. I appreciate the level of engagement our community had with Jim’s segment and I’m confident that the qualities you all espoused are being taken into consideration as this process moves along.

Dom with the City of Aurora’s Census 2020 initiative gave a brief presentation on what to expect with this year’s census. Staffers are already performing door-to-door canvassing to verify addresses and ensure folks are aware of the questionnaire, which should be dropping early next month. Census workers will have some sort of city identification on them (a lanyard with the Aurora Census 2020 logo and city seal), so if you feel unsure about someone coming to your door don’t hesitate to ask them for ID or to call 303.739.7400. To learn more about the census, click here.

RTD is once again targeting Aurora for major service reductions, with the R-line and a few key bus routes in our city bearing the brunt. The R-line has seen a 6.2% increase in its ridership while most other light rail lines are seeing declines in ridership, and two bus routes that serve Buckley AFB, the Community College of Aurora, and several schools in our city are also on the chopping block. From my perspective Aurora is already under-served by RTD, and we need to protect the service that we already have and work to improve it.

Please try to attend one of the public meetings listed here to let RTD know how important public transit is to Aurora and the residents and businesses of Ward IV. The upcoming meeting at the Aurora Central Library (14949 E. Alameda Parkway, Aurora, CO 80012) on February 25th at 6 PM is the most close-to-home gathering for Ward IV residents.

There has been a lot of misinformation about this ordinance, with some of it being spread by council members on social media and talk radio. I’d like to take this opportunity to set the record straight.

This ordinance does not…

That’s it. Here’s the relevant section from the ordinance, and can find the full ordinance in our February 3, 2020 study session package. 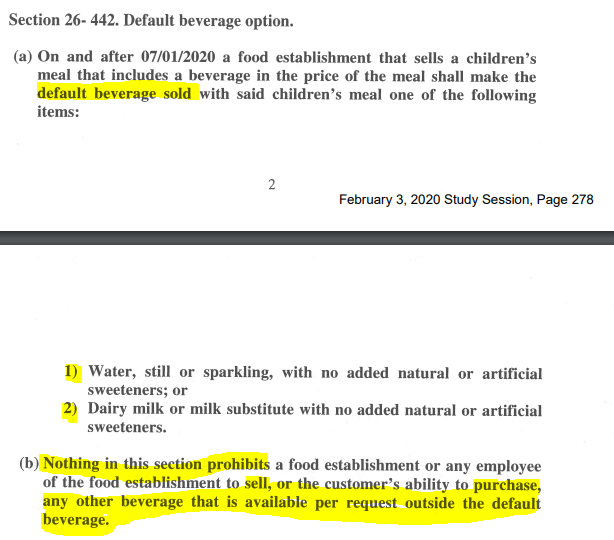 If you hear anyone saying anything to the contrary, please point them to this update or to the study session packet so they can read it for themselves. If you hear any council members telling you otherwise, please tell them to re-read their backup.

Regarding concerns about cost to businesses, the organizations partnering with CM Lawson to bring this forth are putting together a grant fund to prevent small businesses from being burdened by printing costs and have extended the implementation period to six months after the passage of the implementation of the ordinance (roughly 7 months after it would be passed by council). They have made it clear from the beginning that their mission is to make healthier choices the default option; not limit consumer or parental choice in what their kids drink or shut restaurants down.

Due to confusion stemming from an earlier meeting when we went back and forth on different versions of our schedule, I will not be at the February 24th council meeting. I will instead be attending the Urban Land Institute’s Housing Opportunity 2020 conference in Miami, FL, where I hope to pick up some innovative ideas to add to our toolbox to tackle housing affordability and smarter city planning in Aurora. I’ll still be available by email (jmarcano@auroragov.org) or by text (720.634.6927), so don’t hesitate to reach out and I’ll get back to you as quickly as I can.