Hello everyone, it’s update time! It’s been another busy (and snowy!) set of weeks, so I hope you enjoy the extra content.

This week’s meeting had several topics of interest, including an economic development incentive, the community police task force, and finalizing appointments to the Civil Service Commission.

The $336,435 incentive before council was for Kärcher, a German-based company that wanted to consolidate its North American operations by building a headquarters in Colorado. It is important to note that Kärcher’s headquarters in Aurora has been under construction long before the incentive deal was scheduled for a vote and it is clear to me that they would have relocated to Aurora without any incentive at all.

If that sounds strange to you, good. The kinds of incentives have been under scrutiny for decades and there is a mountain of studies that have been conducted on the topic. Some key takeaways from that vast body work are as follows:

Aurora is already a great place to do business. We are located adjacent to one of the busiest commercial airports in the country, we have a large amount of undeveloped land, robust infrastructure, and we boast an educated and motivated workforce. We do not need to sweeten the pot any further.

In spite of the data, the resolution to approve the incentive passed on an 8-2 vote, with only myself and CM Coombs voting against it.

The resolution creating the task force passed on a vote of 7-3, with CMs Gruber, Bergan, and Berzins voting against it. Applications are now open for interested Aurora residents. The deadline to apply is February 21st by 5 PM, so if you are interested in serving on this task force be sure to apply as soon as possible.

I went on the record stressing that the task force makes issuing a recommendation on the independent review body a priority as this is something many Ward IV constituents have reached out about over the past two months. A strong independent review board is something that is long overdue, and I am hopeful we are able to institute that and other major reforms before the year is through.

After interviewing five applicants for four vacancies for the Civil Service Commission, we appointed three individuals, leaving one position on the commission open. Two of the five applicants did not receive enough votes to be seated, so we will be receiving a new list of applicants, interviewing them, and voting on who will fill the last slot in the weeks to come. If you are interested in applying, you may do so by following the instructions on this page. For more information on what the Civil Service Commission does, click here.

Our next ward meeting is coming up fast! Join us on February 20th at 6:30 PM at the Stampede.

City Manager Jim Twombly will be in attendance to take your questions on the search for our next chief of police, staff involved with the 2020 Census will come by and present to us the importance of ensuring all of our neighbors are counted, we’ll have a more in-depth conversation about the service reductions RTD is currently targeting for Aurora, and we’ll have an opportunity to talk about changes to our animal code, campaign finance laws, public banking, and more.

I received a bit of feedback regarding the accommodations at the Stampede after our last meeting and we’ve made the following changes. We will have standard height seating available for our more seasoned residents and those who were uncomfortable with the high tops and bar stools. We’re also going to have the main screen dimmed so that folks in the front rows aren’t blinded by presentations.

Join us on Monday, February 17th at Providence at the Heights (15650 E Alameda Pkwy, Aurora, CO 80017) to make sure that PATH is ready to be home for new residents. You can find out more about the event and sign up to help stage the apartments by clicking here!

Aurora Sister Cities International (ASCI) is hosting their third annual winter celebration at the end of this month! ASCI is an important program that offers opportunities for youth educational and intercultural exchange, as well as avenues to build international relationships for trade and innovation in both the public and private sector between Aurora and cities around the globe. I encourage you to join us for this year’s celebration and help set ASCI up for success in 2020 and beyond! 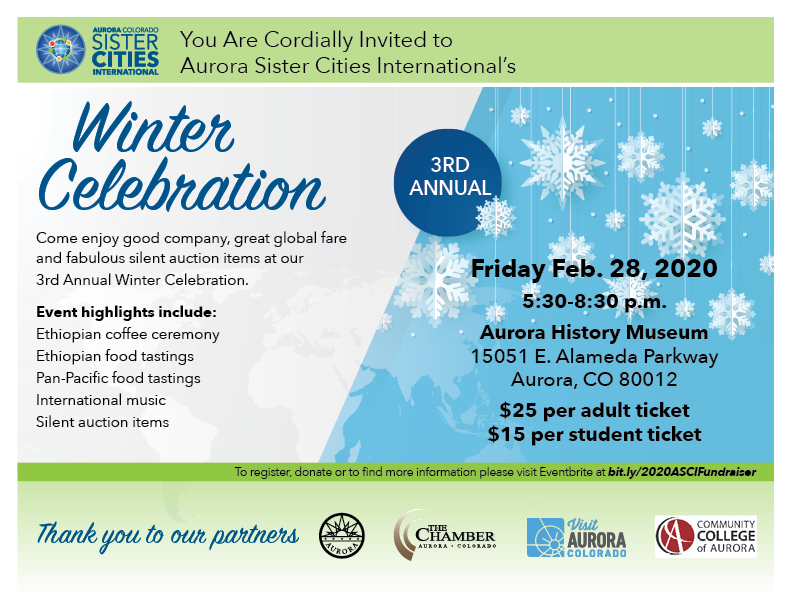 In addition to study sessions, policy committees, constituent services, and ongoing legislative efforts, we also had our Winter Workshop on February 8th and dinner with the Consul-General Takeuchi of Japan on February 9th. As always, I’m available by email at jmarcano@auroragov.org or by phone at 720.634.6927. Have a great weekend!