I hope you had a great week and are ready for the holidays! Here’s what we got up to on the week before Christmas.

Rezoning, protests, and calendars were the big issues before council this week. After presentation from staff and developers and a few questions from council, we unanimously passed a trio of amendments to the High Point development plan. The primary difference was the addition of more mixed-use, dense development along the 64th avenue corridor, creating a walkable town center vibe near the Gaylord Rockies convention center. With regards to housing, affordability for workers at DIA and the Gaylord are top concerns for several councilmembers, as well as working with our small business community to ensure they aren’t priced out of the new commercial spaces in this development. I look forward to continuing the dialogue as the project moves along.

An update to Aurora’s targeted picketing law made its way to the floor for its initial reading. Targeted picketing has been unlawful in Aurora for nearly two decades, but Councilmember Bergan saw the need to update what was in our city code after the protest in Tollgate Crossing that occurred in September. While I was strongly opposed to the version of the ordinance that made its way to study session before the new class of councilmembers were sworn in, what made its way to the floor was effectively an updated version of the language we already had in place with a few exceptions:

The ordinance ultimately failed on a tie (5-5, with Mayor Coffman creating a tie) and will be on our agenda at the January 6th meeting. I intend to support another amendment reducing the maximum fine for violating the ordinance from $2,650 to something a little more reasonable and then supporting the final passage of the law as it is better suited to facilitate peaceful protest than the current language in our code.

The most hotly contested item on the docket for this week’s meeting was our 2020 meeting calendar. The tension did not arise because of dates for meetings but rather due to a second calendar option that was tethered to an alternative form of public invited to be heard that came with a time limit before moving onto other agenda items. While I agree that our current process for public invited to be heard is non-interactive and leaves a lot to be desired, I did not support the secondary calendar because of the cap on total time for public invited to be heard. I emphasize with concerns about the amount of time that staff and those attending meetings for reasons other than public invited to be heard sometimes have to wait before we begin with regular business, but I strongly disagree with limiting the time residents have to speak with city council. I believe that we should revise the council rules to allow residents to speak with council rather than speak at council, and that we should give this topic the time it deserves in a rules committee meeting — preferably with public input at said meeting — before we make any changes to the format.

Our staff presentation at the January 16th ward meeting will be from Public Works. They will be discussing the Westerly Creek and Toll Gate Creek trail connection project, upcoming work on the Havana corridor for bus rapid transit, and giving a general overview on how transportation improvement project grants work. It is sure to be an informative segment of our meeting, and I hope to see you there!

Statement on the Meier Incident

By now most of you have heard about the situation with an intoxicated Aurora police officer that occurred back in March. I want to begin by saying that I strongly condemn the way this situation was handled.

I do not support the excuses made for setting a double-standard for how we treat civil servants compared to ordinary residents. Our police officers should enforce the law and should never be held above it.

I do not accept the rationale as to why we chose to keep this matter from the public eye and scrutiny. The policies we have in place are not working to build confidence in our police department, exacerbating the other issues our community is currently grappling with.

We were told that part of the penalty for the officer’s behavior included a demotion, but a Colorado Open Records Act finding sent to me by a concerned citizen shows that the demotion did not take place until October 12th, 2019 — nearly seven months after the incident occurred. You can see the document shared with me in the image below. 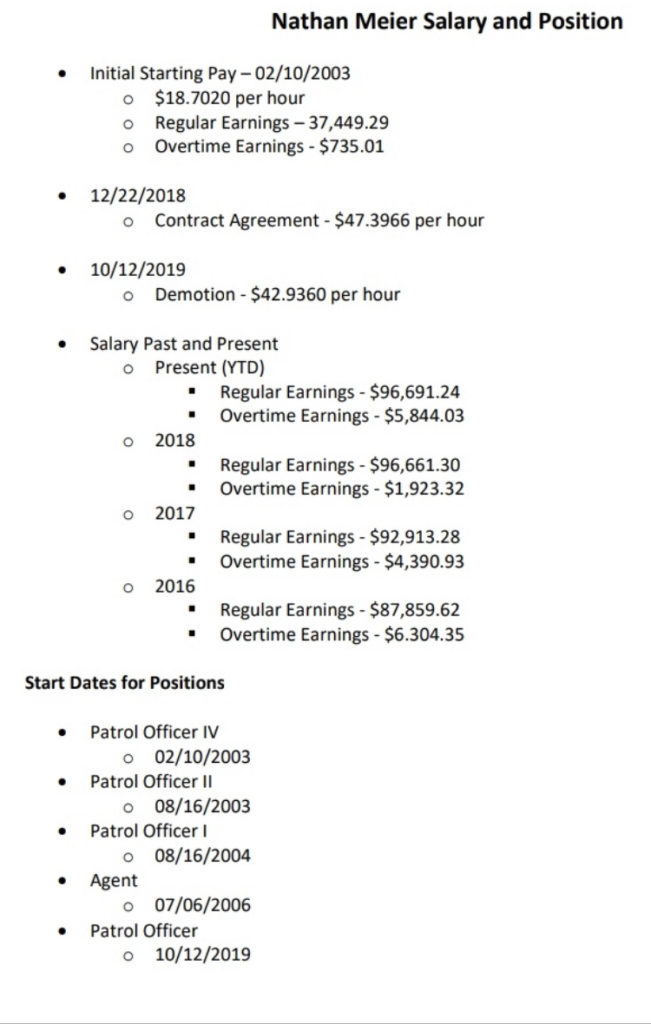 Many of you have reached out by text, call, email, and social media to let me know you are dissatisfied with the handling and outcomes of this situation. I agree with your sentiments and am taking the following actions:

I want to stress that these initiatives are not guaranteed to come to fruition as we need six votes to pass an ordinance through city council. Any changes made to the civil service commission may likely require a ballot question and will require support of a majority of Aurorans in November to become law. I believe these initiatives, when coupled with the work already underway to create an independent review board, will set Aurora up as a model for the country for what an accountable and trustworthy law enforcement agency looks like. This is going to be a heavy lift, but I believe we’re up to the task, and I encourage you all to engage with us as we move forward with this work.

I want to end on this note: the work our first responders do is difficult, taxing, and can be traumatic. I want to make sure we are addressing the stigma surrounding utilizing therapy and counseling services as we are working to increase transparency and accountability for our civil servants. Seeking help is not a weakness, and we need to make sure we are doing everything we can to care for those who serve us.